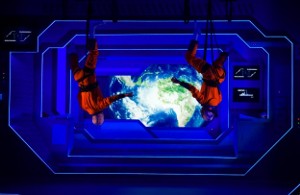 The play, "Mission to Mars", is aimed at children and tells the story of the first humans to travel to Mars. Set in the year 2035 AD, it aims to inspire the audience about science, space and their own future. It may even inspire the very astronauts that may be around in 2035! As well as the play itself, which toured nationally over the last year, a special Astronautical Challenge for primary children was created to run alongside the play and recruited the children to UNSA - the Unlimited Space Agency - for whom, over several weeks, they performed scientific challenges and shared reports with Mission Control. It was this aspect that earned the first award - the UK Charity Award for Arts and Humanities, which was presented at a grand reception in London.

As if that was not enough, earlier this week the play itself won the Sir Arthur Clarke award for Space Education! Announced at a special award dinner at the UK Space Conference, the award was presented by astronaut Tim Peake (pictured on the left). The award itself (known simply as an "Arthur") is monolith-shaped and is given in recognition of achievement in space education and outreach.

"Mission to Mars" has been a very exciting project that has brought some of the excitement of science and space to a totally new audience, and we are all delighted that it has been recognised with two such different awards. Planning is now underway for the next stage, so watch this space!