Radiation from the largest solar storm in a decade started battering the Earth's magnetic shield and upper atmosphere on Tuesday (24th January), and has led to some spectacular auroral displays over the UK. It has also resulted in the re-routing of several high-latitude flights, and protective measures being put in place by satellite operators and electricity grid companies close to polar regions. The storm started early on Monday morning with a medium-sized solar flare that erupted close to the centre of the Sun, and then triggered a very fast coronal mass ejection that blasted off towards Earth at around 6.4 million kilometres per hour (4 million miles per hour) - arriving just over a day later. Some of those particles entered the upper atmosphere above the polar regions and made their way a lot further south than the usually do. Indeed, the following image was taken by photographer Reed Ingram Weir whilst travelling through Northumberland, and reveals the stunning beauty of the Aurora Borealis (Northern Lights). 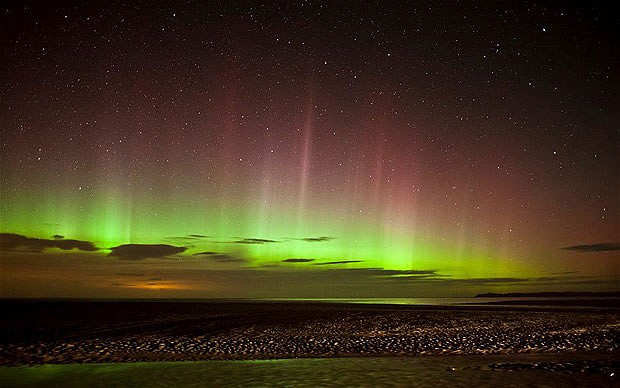 Aurorae can create many different patterns and colours during a display, but this can change dramatically within seconds. The colours are due to atoms and molecules in Earth's atmosphere de-exciting following a collision with a charged particle from the Sun. We find that different atoms give off different colours of the spectrum after they are excited. Oxygen at about 90 kms (60 miles) up gives off the familiar yellow-green colour, whilst Oxygen at higher altitudes (200 miles) gives the all red auroras. Ionised Nitrogen produces much of the blue light we see and neutral Nitrogen gives off the red-purple colour and leads to rippling at the edges.