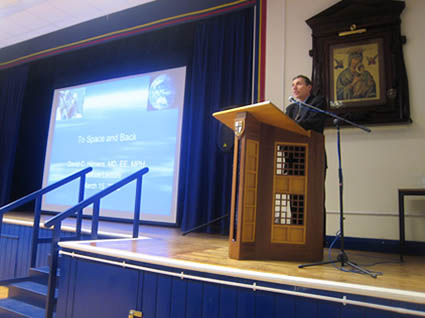 The Astrophysics Research Institute (ARI) - that's where the NSO is based - was honoured by a visit from former NASA astronaut David C Hilmers. David was on a visit to the UK, talking in the House of Lords, St. Anselm's College in Birkenhead, the ARI, Spaceport and finally St George's Hall in Liverpool to deliver the 104th Roscoe Lecture.

Students from three schools were present for his talk at St. Anselm's College (St. Anselm’s were joined by Upton Hall Convent School and Birkenhead School for Girls). Professor Mike Bode from the ARI and Professor Hilmers were greeted by the headmaster, deputy head and two students before entering the packed assembly hall for his eagerly awaited talk.

St Anselm's was chosen for the visit due to their previous involvement with the NSO, where students can take part in activities such as Asteroid Hunting on behalf of the internationally backed Minor Planet Centre (MPC).

“it is important to follow your dreams and if you work hard, and have a little luck, anything is possible”

During his time at NASA, David orbited the Earth for over 493 hours, during which time he witnessed a sunrise or sunset every 45 minutes. David saw first-hand the damage being done to our planet through de-forestation, global warming and natural disasters. While preparing for his last ever shuttle mission, David needed to decide on a new career and chose medicine so that he could help all those people who lived in the areas he had seen from the observation window on-board the shuttle. So after NASA, David applied to medical school, spent four years training, then an additional 4 years as a resident, before joining the Faculty at a Baylor College of Medicine at the Ben Taub General Hospital where he now works. 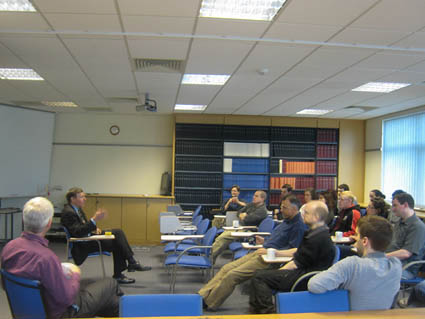 After his school talk, David then continued on to the ARI (where the NSO is based) where he sat with staff and students for a Questions and Answer session. During the chat, he discussed the logistics of travelling to Mars and possibilities for overcoming zero-gravity during long distance space travel. David’s final stop on the Wirral was to the Spaceport visitor attraction, where he re-visited a launch in the SpacePod, toured the various learning zones and took an interest in the “Wallace and Gromit in Space” exhibition.

If that wasn’t enough for one day, David was then taken to St George’s hall where he delivered the 104th Roscoe lecture in front of an audience of over 600 in the Great Hall. David took us through a tour of his life, from his beginnings in the army, through his NASA missions and finishing with his current activities at the Ben Taub General Hospital in Houston Texas. He also discussed all the charity work he does in various disaster and war zones around the world.

He finished the Roscoe lecture by conveying to us that we don’t need to be astronauts or doctors to be able to help make the world a better place. We can do this with the little things we do every day to help each other, as well as working on some of the larger projects we hear about all the time.