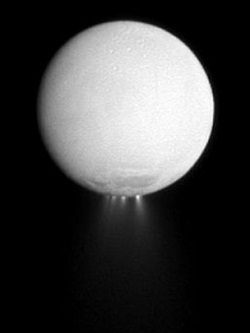 NASA's Cassini spacecraft made an extremely low fly past of Saturn's moon, Enceladus, yesterday in order to investigate the strange jet-like features that erupt from the moon's southern polar regions. At an altitude of just 74 km (46 miles) this was the lowest fly past ever undertaken by Cassini, and it is hoped that the spacecraft collected enough data to work out exactly what the plumes are made of.

The jets appear to erupt from cracks at the south pole, known as tiger stripes, and astronomers have speculated that they are being fed by a pressurised liquid water ocean beneath Enceladus' frozen outer ice shell. If the spacecraft's instruments are able to confirm this, then this unassuming moon could become another potential target in the search for life elsewhere in the Solar System.

It is thought that the cracks at the south pole of Enceladus were created by the strong gravitational pull of Saturn, which stretches and twists the fissures, thereby keeping them open, during the moon's highly oval-shaped orbit.

If you would like to learn more about the recent fly past, please go to NASA's Cassini website.