Mars is at its closest to Earth until 2035 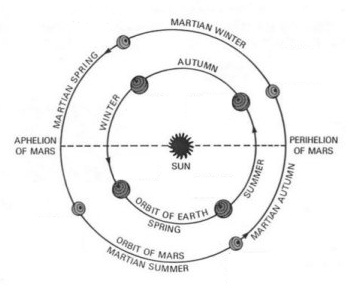 Why does Mars look so bright at the moment?

If you’ve looked at the night sky over the last week you’ve probably seen the planet Mars. It’s been hard to miss. Since the 6th of October 2020, it’s been the second brightest object in the sky after the Moon.

Like the Earth, and other planets in our Solar System, Mars orbits the Sun. Mars is further away from the Sun than the Earth, so its orbit takes longer. The Earth races around the Sun in about 365 days while Mars takes about 687 days. This means that sometimes the two planets are really far apart, on different sides of the Sun. Other times, Earth catches up and Mars is relatively close.

When the Earth is directly between a planet and the Sun, astronomers call it opposition. An opposition is a good time to observe planets because they are closer than usual and so they appear bigger and brighter.

Mars reaches opposition tonight on 13th October 2020. This opposition is predicted to be the best opportunity to view Mars until 2033. Mars will remain bright for weeks, which is good for younger astronomers because in November you won’t have to stay up so late to see it in the sky. Remember you can plan your observations using our Night Sky tools.

We have a good chance of being able to see surface features on Mars using the Liverpool Telescope. Request an observation using Go Observing and see if you can spot the polar regions or the darker central regions that were once thought to be Martian Seas.

If you manage to get any good observations of Mars in the coming weeks, we would love to hear from you, so please send us an image or share it on our social media @SchoolsObs #ShowTheNSO

When do oppositions with Mars take place?

Because the Earth has a shorter orbital period than Mars, we find ourselves passing between Mars and the Sun on a regular basis. On average, opposition with Mars happens every 26 months.

If the orbits of Mars and Earth were perfectly circular, Mars would be at its closest to Earth at each opposition. However, Mars and Earth have elliptical orbits. This means that Mars (and the Earth) travels a bit closer to the Sun at one end of its orbit than at the other. Perihelion is the point in a planet’s orbit when it is closest to the Sun. Aphelion is when it is furthest away from the Sun. Mars will appear bigger and brighter during perhilic oppositions (because it’s closer to Earth) than during aphelic oppositions. October 2020’s Mars opposition is a ‘perihelic opposition’.

In order to help you picture what is going on, why don't you use the NSO's Electric Orrery to see how the perihelic and aphelic oppositions differ.