After travelling across the Solar System for 8 months, NASA's Mars Science Laboratory mission has just arrived safely on the surface of Mars. The primary goal of the mission was to land the Mars Curiosity Rover on the Martian surface in one piece; not an easy task given that the rover weighs around 900 kg. The final descent into the atmosphere took place on the Monday 6th August and involved a three stage process. Soon after entering the atmosphere, a large parachute was deployed to slow the lander further (as shown below), and once closer to the surface the sky crane section (containing the rover) was released and continued its descent using four booster rockets. The final stage involved the sky crane hovering 20 metres above the surface whilst lowering the rover to a soft landing using nylon cords. Thankfully, everything went to plan and so far the rover appears to be in good health.

Given the huge distance to Mars, the entire landing process had to be undertaken automatically using the on-board computers and, quite frankly, is an incredible feat or science, engineering and programming; so hats off to NASA and the MSL team for a job well done.

Once various checks have been completed, the rover (shown above) will begin a two year mission to search above and below the surface for signs of microbial life, such as bacteria, using a suite of high-tech cameras and detectors. In other words, Curiosity is designed to determine whether Mars was able to support life in the past, or may even do so now. 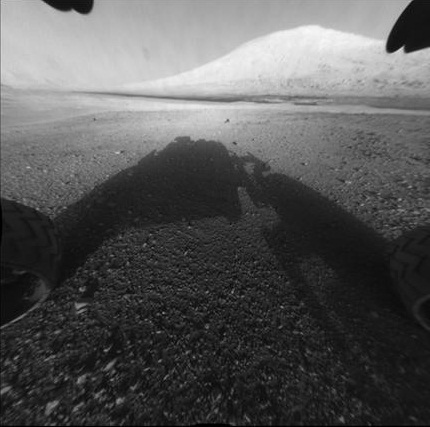 In order to get around, the rover has six independent wheels that are powered by a radio-isotope system that can generate electricity from the heat of plutonium's radioactive decay. This nuclear power source will allow the mission to operate on Mars' surface for at least a full Martian year (687 Earth days), and provides greater mobility and operational flexibility, enhanced science payload capability, and exploration of a much larger range of latitudes and altitudes than was possible on previous missions to Mars. In fact, Curiosity is five times as large, and carries more than ten times the mass of scientific instruments than were on the Mars Exploration Rovers (Spirit and Opportunity).

There is no doubt that we will be reporting on Curiosity's adventure in the future, but if you would to know more about the Mars Science Laboratory right now then please visit the main mission page.