The world has lost a true icon of space exploration 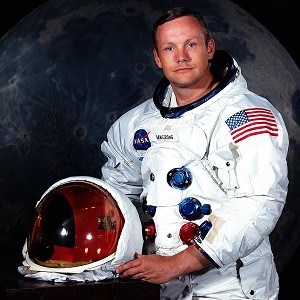 Astronaut Neil Armstrong (NASA)
Neil Armstrong, the first man to walk on the surface of the Moon, has sadly died at the age of 82. The NSO would like to join millions of others around the world in paying tribute to his pioneering spirit and bravery, which helped to push forward the boundaries of space exploration. With the support of an enormous team of NASA scientists, engineers and astronauts, it was nonetheless his mission leadership and piloting skills that led to his first tentative steps off the lunar lander and allowed him to utter the immortal words:

"That's one small step for man, one giant leap for mankind"

Armstrong commanded the Apollo 11 spacecraft that was launched from the Kennedy Space Centre (USA) on 16 July 1969. Along with crew members Buzz Aldrin and Michael Collins, they entered orbit around the Moon after a three day journey, but it was not until the 20 July that the lunar module (Eagle) separated from the command module (where Collins remained) and descended to the surface. And it was the early hours of the 21 July that Neil Armstrong eventually stepped off the Eagle's ladder to make history. Armstrong and Aldrin then spent around three hours on the Moon's surface collecting samples, conducting experiments and taking photographs, before blasting off again to the orbiting command module. Once inside, the module then fired its rockets to return to Earth just eight days after setting off. Not surprisingly, the three men were treated as heroes and their exploits made news around the world. Even though it was over 40 years ago, the story of Apollo 11 (see video below) remains a fascinating example of what mankind can achieve with a good deal of hard work and dedication. It is also testament to the professionalism and talent of the mild-mannered astronaut that the world lost today.