NSO students are stars of the Sky at Night 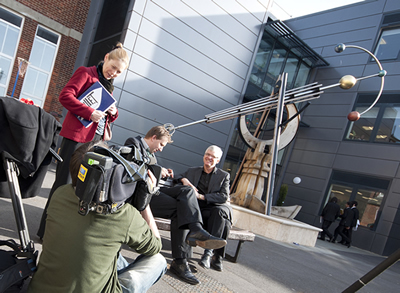 Professor Mike Bode, the director of the Astrophysics Research Institute at Liverpool John Moores University (i.e. our boss), and the BBC Sky at Night production team, recently visited The Portsmouth Grammar School (PGS) on the 20th February to record material for a special episode on Citizen Astronomy, which aims to encourage people of all ages to take up science, contribute to professional research and hopefully lead to new discoveries.

The filming was designed to highlight activities available to students through the National Schools’ Observatory (NSO).

The school was selected due to their enthusiastic participation in previous astronomy related activities. Acting Head of Physics, Mr Jeremy Thomas, had used the activities available on the NSO website with after-school astronomy clubs, and was keen to use them in direct support of the national curriculum.

Mike started the day off describing some of the exciting ways the class could participate in professional research through the NSO, including, tracking near Earth asteroids, classifying supernovae and joining the hunt for other planets orbiting nearby stars. He commented "The exercises the pupils undertake are interesting and exciting in their own right, but they lead onto projects using NSO resources where they can make new discoveries".

The Year 7 class then used observations from the Liverpool Telescope to discover and then measure the speed of asteroids, which Mr Thomas linked to the study of Motion and Forces within the national curriculum. Indeed the students found asteroids travelling around 20,000 km per hour - thankfully not heading for earth.

Later in the day another class, students in Year 10, calculated the height of mountains on the Moon by measuring the length of their shadows from the NSO’s giant Moonsaic (a jigsaw puzzle of the moon). This was a technique used by Sir Patrick Moore to produce maps of the moon for NASA to determine the first moon landing sites.

Mr Thomas ended the day saying "The great thing about incorporating the NSO activities into your lessons is that they engage pupils with real data to solve real problems in areas that continue to fascinate them, such as astronomy and space exploration – this really is how science works".

Citizen Astronomy on the Sky at Night will be shown on Sunday 4th March 11.35pm on BBC1 and in an extended programme on Thursday 8th March at 7.30pm, on BBC4. 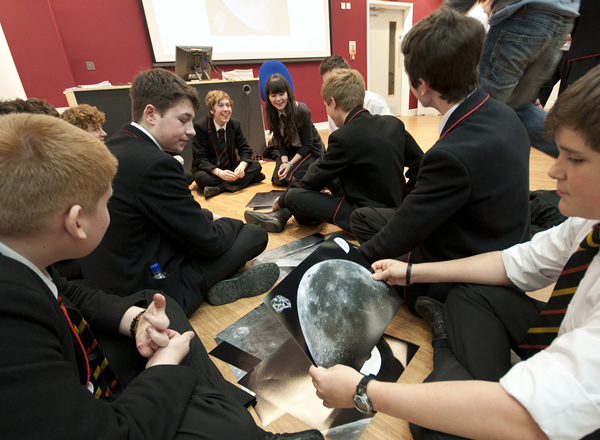 Which way is up? This is harder that it looks!
Photograph courtesy of Chris Reed, photographer in residence (PGS)