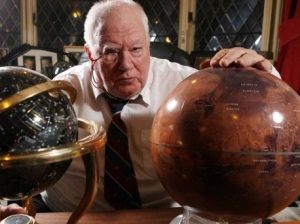 Sir Patrick Moore : 1923 - 2012
Credit: Paul Grover
The National Schools' Observatory is truly saddened to learn about the passing of a true giant in the field of UK astronomy. Sir Patrick Moore's contribution to the public understanding of astronomy over the past five decades is unrivalled, and it is fair to say that the world has lost one of the few real characters in public life; a man whose passion and knowledge has inspired millions of people around the UK to marvel at the wonders of the Universe.

Indeed, you would find it hard to discover a UK-educated astronomer these days that was not inspired by Sir Patrick in some way, whether it be through reading one of the 70+ astronomy-related books authored by him, or through his four decades presenting the BBC's Sky at Night programme; a programme which covered many historical events, such as the launch of Sputnik in 1957, the first man in space in 1961, the moon landings that ran from 1969 to 1972, and yet remains popular to this day.

Outside of astronomy, Sir Patrick Moore lived a remarkable and at times musical life, and this has been well documented in the obituary written by the Telegraph newspaper.

This day is especially poignant for the NSO, as Sir Patrick has been a good friend and supporter of the Liverpool Telescope and the NSO since the early days, and we have been particularly honoured and proud of that association. To those that knew him, he was a generous, knowledgeable and inspiring character, who has clearly had a huge impact on the astronomy scene in the UK. Sir Patrick Moore ... RIP.