A meteor shower occurs when the Earth passes through the debris trail left by a passing comet. In the case of the Perseid meteor shower, the culprit is an object called Swift-Tuttle, which was first discovered in 1862 and is known to orbit the Sun once every 130 years. Meteor showers provide us with a better chance of seeing a meteor or 'shooting star' - these are small pieces of rock or dust that enter and burn up in the atmosphere, creating bright firey trails across the night sky. 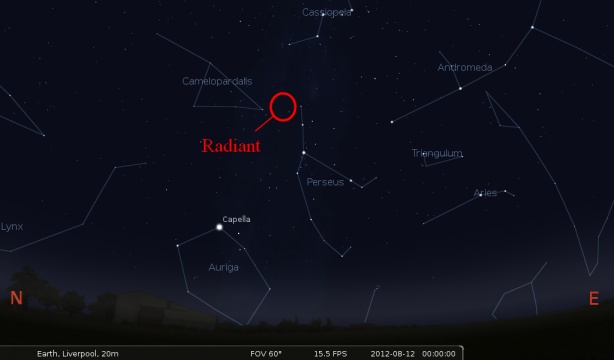 Stellarium image of the night sky at midnight on the 11th/12th August - radiant is circled.

The meteors from the Perseid shower will start close to a point known as the radiant (see above), which is in the constellation of Perseus - hence the name of the meteor shower. The number of meteors will peak around the 11th-12th August, when we pass through the centre of the comet trail. During this period we can expect to see around 60 meteors per hour, which is up from the usual 5 or 6 per hour we can expect on a typical night.

During the night of the 11th/12th August we also have to contend with a waning crescent Moon, however, if we aim to observe before it rises shortly after midnight, we should still get around 2 hours of reasonably dark skies following the sunset at around 10pm - weather permitting of course. Our advice would be to head out at around 11pm with some warm clothing, a hot drink and a comfy chair, and keep your eyes looking in the direction of Perseus (see image above), which can be found above the North-Eastern horizon. Be aware that the meteors will only last a fraction of a second, so you have to concentrate .... blink and you'll miss them.