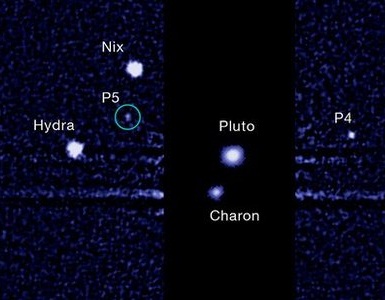 A team of astronomers using the Hubble Space Telescope have recently discovered a fifth moon orbiting the dwarf planet Pluto. From the brightness of the new object, which is seen as a circled speck of light in the image to the right, its discovery team believes that it has an irregular shape, and that it is between 6 and 15 miles across. With an orbital distance of around 42,000 km (26,100 miles), moon P5 (as it is known for now) takes around 20.2 days to orbit Pluto, and is the second furthest moon from the icy dwarf planet.

Given that Pluto is such a relatively small object, at around 2/3 the size of our Moon, the team that found P5 are amazed and intrigued that the system can contain such a complex family of moons. Current theory suggests that all five moons are the remains of a collison between Pluto and another large object a few billions of years ago.

The new discovery will help NASA to determine a safe path for their New Horizons spacecraft, which is due to fly past Pluto and its moons in 2015, at around 30,000 mph. If the mission runs smoothly, we should soon know whether there are any more moons lurking in the darkness.