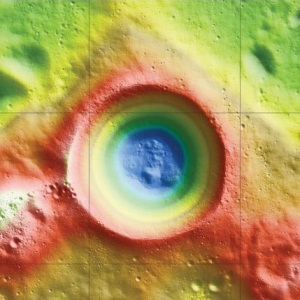 Recent measurements from NASA's Lunar Reconnaissance Orbiter (LRO) have given astronomers their first glimpse into the murky depths of a secretive crater at the South Pole of the Moon. The Shackleton Crater is one of a number of permanently shaded craters that are never directly illuminated by sunlight, and have therefore resisted exploration until the advent of new technologies. The LRO spacecraft recently used a laser altimeter to precisely map surface features within the crater - as seen in the image to the right, where red colour represents the high walls of the crater and blue colour shows the base of the crater some 3 km below.

View NASA's Video on the mapping of the Shackleton Crater

The crater is named after the British Antarctic explorer Sir Ernest Shackleton, and is around 20 km (more than 12 miles) wide and over 3 km (2 miles) deep, which is about the same depth as the oceans on Earth. The recent measurements reveal that the rugged base of the crater is actually more reflective than your typical lunar crater, which in turn suggests the presence of ice. In fact, the LRO team believes that ice may account for around 22%percent; of the material on the crater floor, with more ice embedded higher up within the crater walls. The existence of surface ice opens up the possibility that any lunar bases built in the polar regions could have easy access to the fundamental resource of water, which is essential to human survival.

To find out more about the Lunar Reconnaissance Orbiter, please visit the LRO website.