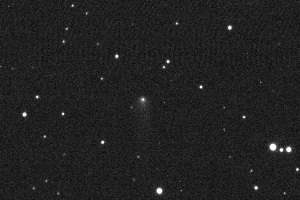 Just thought we would share an early image of Comet C/2012 S1 (ISON) with you, that was taken by the Liverpool Telescope on the evening of the 25th March. The comet, which should traditionally be called Comet Nevski–Novichonok after its discoverers, is a sun-grazing comet that may become one of the brightest comets for many a year during November and December 2013. And it if doesn't break up as it swings around the Sun, it should still be visible to the naked eye in the northern hemisphere through Christmas and well into 2014.

Although the exact brightness of the comet is hard to predict at this stage, some astronomers think it might be one of the brightest comets since 1935 - assuming it isn't broken up by the Sun that is - but we will keep you posted on its progress using our Facebook page.