The National Schools’ Observatory (NSO) along with the Faulkes Telescope Project (FTP) and the Discover the Cosmos Project ran a nationwide competition this year asking school children across the UK to submit names for a recently discovered asteroid.

The winner of the competition, Robin from Ysgol Glan Clwyd (a school in North Wales) was presented with his prize, a real fragment of meteorite, at the National Eisteddfod in Denbighshire on 5th August by Dr Sarah Roberts (Director of Education at the FTP). Robin’s name suggestion was Isaac Roberts after the Welsh engineer and astronomer, who was the first person to photograph the Andromeda Galaxy in all it's glory and the first to photograph an asteroid.

Sarah said “We particularly liked the fact that Robin had chosen a Welsh astronomer from his local area, who is now buried in Birkenhead where the NSO team were based – so the name Isaac Roberts had good links with both projects.”

You can read more about Robin's reason for suggesting the name as well as the two runners up here. 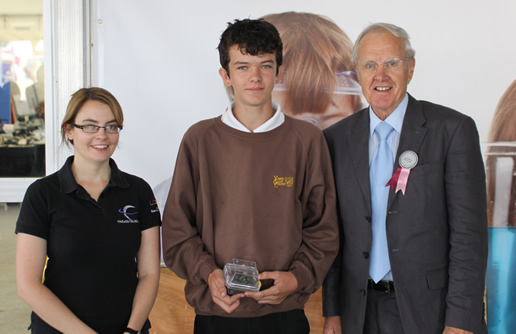