Three habitable zone planets found around a nearby star 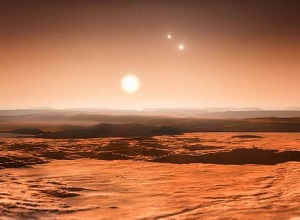 Artist's impression of a triple-star system
Credit: ESO
An international team of astronomers, which includes previous colleagues of ours from the ARI, have combined the observations from several telescopes to determine that the nearby star Gliese 667C has at least six planets orbiting around it. To add to the excitement, the data suggests that three of these planets are orbiting within the habitable zone (HZ) of the host star, which opens up the possibility that they could support life.

Gliese 667C (or GJ 667C) is a cool M-class star that is the faintest member of a triple-star system; a system located around 22 light-years away in the constellation of Scorpius. The three potentially-habitable planets are all classed as super-Earths in that they are just a few times more massive than the Earth; and because the host star is so cool (around 3000°C) their orbital periods are just 28, 39 and 62 days - which is much less than the 88 day orbit of Mercury around the Sun.

With Gliese 667C being part of a triple-star system, the two brighter stars would be clearly visible (both night and day) from the surface of planets around Gliese 667C. The artist's impression (to the right) gives you an idea of what visitors to Gliese 667Cf (one of the new HZ planets) might see in the daytime.