The curious case of Kepler-78b 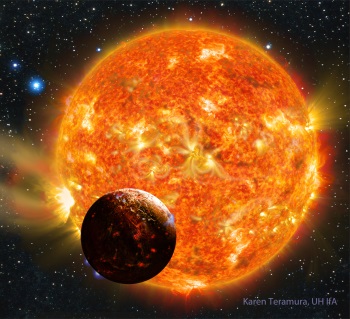 Astronomers are puzzled by the recently discovered Earth-like planet, Kepler-78b. Like Earth, it is a small rocky planet that is similar in size (1.2 times that of Earth) and orbits a star very much like our own Sun. However, with an orbital distance of just 1,000,000 miles (1.6 million km), it is 100 times closer to its host star than Earth is to our Sun, and as such, its surface will be composed of molten lava. Furthermore, it takes just 8.5 hours for the planet to travel completely around the star, which is a very short "year". It is certain that life, as we know it, would not be able to survive there.

The big puzzle is that astronomers don't know how the planet got to be so close to its parent star. The star would have been bigger when it was younger and we are sure that a planet cannot form inside a star. If the planet had formed further out and then been pulled to where it is now by the star’s gravity, then why did it not fall into the star instead of stopping just one million miles away? On first impression it seems impossible for the planet to be where it is, and this has left the experts with somewhat of a mystery.

That said, it is also a very exciting discovery, as it proves that rocky planets similar in size to the Earth are out there and one day we may find another similar planet that can support life.