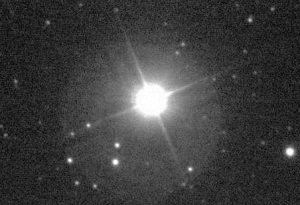 Image of Nova Delphini 2013
Credit: LT
On the 14th August, a Japanese astronomer reported the discovery of a "new" bright star in the constellation of Delphinus. In response, astronomers from our host institute, the Astrophysics Research Institute of LJMU, requested spectroscopic observations of the object using the Liverpool Telescope. The resulting observation was the first "professional" spectra of the new star and proved beyond doubt that it was an erupting nova - a massive nuclear explosion on the surface of a white dwarf star. The brightness of the nova peaked at a magnitude of 4.3 on the 16th August before it started to decay (dim) again. This makes Nova Delphini 2013 the first nova since 2009 that could be seen with the naked eye.

A nova is a sudden brightening of a star, and they are thought to occur on the surface of white dwarf stars within a binary star system - i.e. a system with two stars. When the two stars are close to each other, the gravity of the white dwarf can pull material (mostly hydrogen) from the companion star. As the material starts to build up on the white dwarf, it's pressure and temperature starts to rise to a point where it ignites a runaway nuclear fusion reaction. This releases an enormous amount of energy that blows the remaining gases away and produces an extremely bright outburst of light. Typically, the brightness of the system will increase by a factor of 50,000 - 100,000 and decay slowly over the course of the next 25 - 80 days.