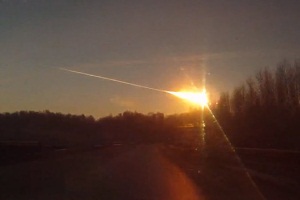 The dangers posed by asteroids were brought home on the 15th February when a meteor exploded in skies above Russia, near the industrial city of Chelyabinsk.

Scientists have estimated that the 10,000 tonne lump of rock was about 15-20 metres in diameter and exploded at around 24 km (15 miles) above the Earth's surface. The resulting shock wave was around 30 times more powerful than the first atomic bomb and resulted in widespread damage that injured more than a thousand people. Most of the injuries were caused by flying glass when windows were blown in, and initial estimates suggest that around 100,000 homes received such damage, along with hundreds of schools and hospitals. Small fragments (or meteorites) of the meteor have been found over a wide area, and initial tests show that the object was mostly made of rock, but contained around 10% of iron.

The meteor explosion over the city of Chelyabinsk was the most powerful since the Tunguska Event in 1908 (also over Russia) which flattened an estimated 80 million trees over an area covering 2,150 square kilometres (830 sq miles) in a mostly uninhabited region of Siberia. That event was thought to have been caused by a 100 metre wide object that exploded around 10 km (6 miles) above the Earth's surface with the force of 1000 atomic bombs. It is estimated that events as powerful as the recent Chelyabinsk meteor occur only once every hundred years.

Note that this event was not connected with the larger asteroid (at around 50 metres wide), known as 2012 DA14, that whizzed safely past Earth just hours later at a distance of 17,100 miles. There is no doubt that the recent events have reminded governments around the world of the importance of efforts to detect and track these asteroids, and the NSO continues to be involved in this task through the Asteroid Watch Programme.