Ring system discovered around an asteroid 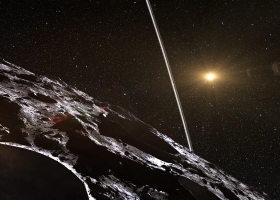 Artists impression
Image credit: ESO/L. Calçada/Nick Risinger
The planet Saturn and its rings is one of the most magnificent sights in the night sky, and although rings have been seen around the other gas giants in our Solar System, none have ever been found to encircle the smaller planets or asteroids ... until now !

Astronomers recently used telescopes in different parts of South America to observe the asteroid Chariklo, as it passed in front of a star - a rare event that is called an occultation. During the occultation, the star appeared to vanish for a few seconds, as was expected, but astronomers were surprised to notice two other very short dips in the star's brightness that occurred a few seconds before and after the occultation. This meant there must be something around Chariklo that was also blocking out light from the star.

When they compared the observations from the different telescopes, not only did the astronomers manage to figure out the shape and size of Chariklo, but they also discovered that the surprising dips in the star's brightness had been caused by two narrow rings around the asteroid. Chariklo, which orbits between Saturn and Uranus, is more than a billion kilometres from Earth and these observations have shown that it only has a diameter of 250 kilometres (155 miles) and that its rings, which start just 9 km (5.6 miles) away from it, are only 7 and 3 km wide.

Chariklo is the smallest object yet found to have rings around it and their origin is still a mystery. One theory is that the rings consist of debris left over after a collision, and that the gravitational pull from one or more tiny moons (yet to be discovered) is keeping the debris contained within two narrow rings.