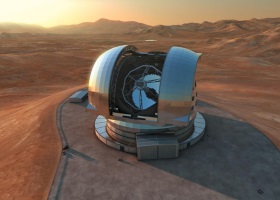 On Thursday 19th June 2014 at 5.30pm UK time, nearly a million tonnes of rock will be blasted off the top of a 3000 metre high mountain in the Chilean Andes to create a plateau upon which the European Extremely Large Telescope
(E-ELT) will be built. You will be able to watch this live on Livestream, or on YouTube.

The E-ELT (whose nickname is ‘World’s biggest eye on the sky’) is being built by the European Southern Observatory (ESO); a multinational organisation to which the UK belongs. The E-ELT mirror will be 39 metres in diameter and it will be the largest mirror of any telescope ever constructed. It will collect 15 times more light than the largest optical telescopes in use today. The telescope has a five-mirror design with the main mirror being made of approximately 1000 hexagonal segments. This will allow the mirror to change shape up to a thousand times per second so that the telescope will be able to adapt to turbulent atmospheric conditions and produce exceptionally high image quality. The extra light gathering power and the flexible mirror segments of the E-ELT will create images 16 times sharper than those produced by the Hubble Space Telescope.

Dr Aprajita Verma, Deputy Project Scientist for the UK E-ELT project at Oxford University said, “The E-ELT will allow astronomers to reach deeper into space, further back in time and more intimately into the workings of the Universe than any other visible to infrared telescope ever built. From probing the first galaxies that formed in the Universe, to studying extra-solar planets and looking for signs of life, we can expect break through advances and new discoveries with the E-ELT.”