And the Sir Patrick Moore medal goes to .... 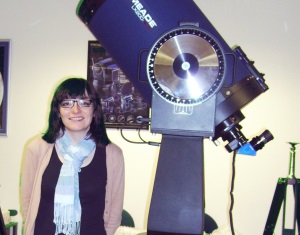 The NSO would like to send its congratulations to Hayley Flood, who was recently awarded the prestigious Sir Patrick Moore Medal by the Royal Astronomical Society.

The Patrick Moore Medal is awarded annually for a particularly noteworthy contribution to astronomy or geophysics by a secondary school teacher.

In Hayley's case, the recognition was for the numerous astronomy education activities she undertook whilst at the Long Eaton School in Derbyshire. Whilst there she became one of thirteen lead educators in astronomy across England, and worked alongside the likes of the Institute of Physics and the European Space Agency to deliver master class sessions in astronomy to her peers. Hayley was also pivotal in the development of a new observatory at the school, which was dedicated as the Malcolm Parry Observatory in January 2012.

From when the observatory was opened until she moved to another school in the summer of 2013, Hayley helped bring inspiring events to Long Eaton, such as Star Gazing Live and observing the 2012 transit of Venus. She also helped to set up and run an astronomical society and an astronomy club.

In response to the award, Hayley commented :

"I am delighted to have won the Patrick Moore Medal and I am very grateful to the RAS for supporting my work by giving me this award. It is wonderful to be able to bring my passion for astronomy into my teaching and it is extremely rewarding to watch the reaction of students who are looking through a telescope for the first time or launching their own rocket into the air. I believe that the topic of space and astronomy can be used as an inspirational context to enthuse students about all branches of science and can be used to great effect in the classroom. Many of the projects we have completed (such as the observatory and the high altitude balloon project) have had an excellent level of support from enthusiastic staff members at the Long Eaton School and without them much of the work that we have done would not have been possible."