July's Image of the Month, came on the very last night, with this observation of Neptune. Neptune has been a popular choice for observations in recent months, but on the last night of July we had the best seeing conditions to observe and this image clearly shows the planet alongside one of it's moons. The colour select tool on LTImage allows us to tweak the display, and this option (Blue-Red-Black high contrast) is helpful in pulling out details for faint objects. Above the image taken on the LT is a panel from the software package Stellarium, which shows the position of Neptune at the exact time and date of this observation, showing that the moon we can see is Triton. This is in fact the only one of Neptune's moons that we can see directly using the telescope as the rest are far too small. So far it's believed that Neptune has 14 moons in total, Triton is the seventh largest in the whole Solar System and is made from a large rock and metal core, and has a surface covered with frozen nitrogen and ice.

If you haven't used Stellarium before why don't you have a try - it can help you chose what to observe night after night - and even into the future! 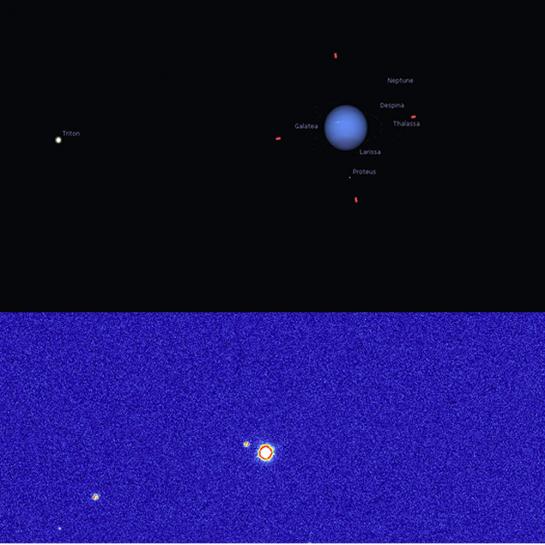