Design of the Liverpool Telescope

Components of the LT ... Show me > the telescope 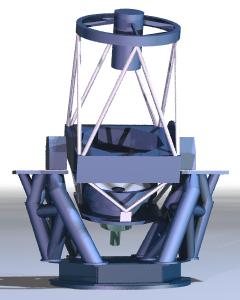 This picture of the Liverpool Telescope (or LT) allows you to find out how the major parts fit together. A modern reflecting telescope like this is a very complicated instrument that requires careful and precise construction.

Click on each part of the telescope to get detailed information on what it does. You can use the links to the left of the picture above.

Show me > the base 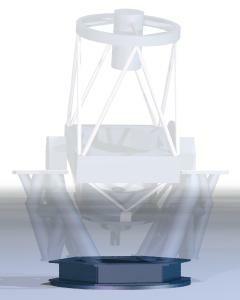 The base of the telescope acts as a firm support for the structure of the instrument. It also houses the azimuth bearings which allow for horizontal (azimuth) or side to side movement of the telescope. These hydrostatic bearings contain two flat or nearly flat metal surfaces that glide across each other on a thin film of oil. The bearings are ultra smooth allowing the telescope to accurately follow the stars.

It is very important that the telescope is perfectly level when it is working, if not, it will be unable to accurately track the stars and take photographs. The base of the telescope can be levelled to within 20 microns (20 millionths of a metre - the thickness of a human hair!). It is also important that the telescope is mounted on a strong concrete foundation, or pier as it is called, to stop mechanical vibrations from around the observatory site disturbing the instrument's sensitive measurements.

Show me > the yokes 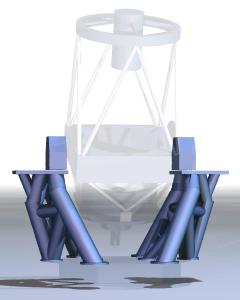 The yokes provide the second axis of movement for the telescope as well as supporting the mirrors, instruments and associated mounting structures.

The telescope moves vertically (up and down) on its altitude axis. The bearings for this movement are located at the top of the yoke. These are ultra smooth hydrostatic bearing of the same type as those used to move the telescope horizontally (azimuth).

The yoke is specially designed to be as rigid as possible which is particularly important when the telescope moves or when the wind speed rises. Vibrations caused by these effects would be disastrous for the telescope, limiting the quality of the images produced and the time the instrument would be in use during the year. The Liverpool Telescope has been designed to operate in wind speeds of up to 80 Km per hour.

Show me > the centre 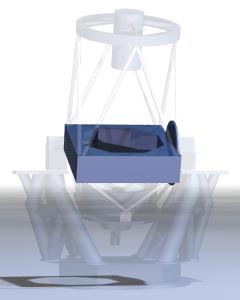 Weighing about 3 tonnes, this part of the telescope is mounted at the top of the yoke. The centre section rotates on the altitude bearings to take the telescope through vertical movements. It also acts as the main structure to which the mirror cell and telescope top end are attached through the trusses.

Show me > the mirror cell 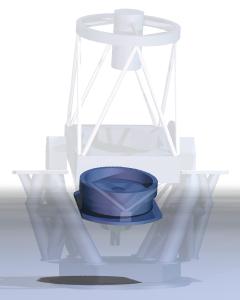 The mirror cell is designed to firmly hold the large primary mirror in place as the telescope changes its position to look at the different parts of the night sky. This is not an easy task when you consider that the mirror is made from glass and weighs about 1.1 tonnes.

With such a heavy weight towards one end of the instrument there is a tendency for the telescope to flex slightly (no structure is completely rigid), particularly as it moves from a position looking towards the horizon to one pointing straight upwards (zenith).

It is the job of the mirror cell to compensate for these slight movements in the telescope's structure and keep all the optical parts in alignment.

Show me > the trusses 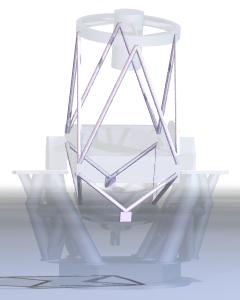 It is essential that these two mirrors are kept accurately aligned with each other. Imagine the telescope in a horizontal position. The weight of the mirrors, in particular the primary mirror, will put stress on the trusses. The tendency is to cause a bending effect, however, to overcome this the trusses are positioned to form triangles along which the stresses can travel.

As you are probably aware, a triangle is a very rigid shape. Bridges and other large structures use triangles to create rigidity. You can experiment with straws - make a number of structures and then add further straws to make triangles in your structure, you will notice that it becomes stronger and more rigid.

Show me > the mirrors 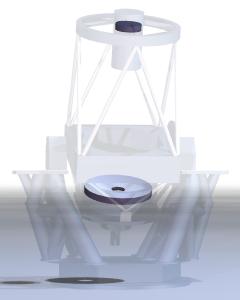 The Liverpool Telescope uses two important mirrors. The first is the primary mirror found towards the bottom of the telescope, which is 2 metres in diameter and weighs over a tonne. Its purpose is to gather as much light as possible from the stars. The surface is slightly curved so that light can be brought to a point or focus where a digital camera is placed, and an image of a small part of the night sky is recorded. The primary mirror is manufactured to an extremely high specification and is the most expensive part of the Liverpool Telescope.

The second mirror is the secondary mirror found at the top of the telescope and its purpose is to re-direct the light back towards the primary mirror and also focus the instrument (make images sharp). This mirror is also a precision piece of optics requiring a lot of time to manufacture.

Show me > the top cell 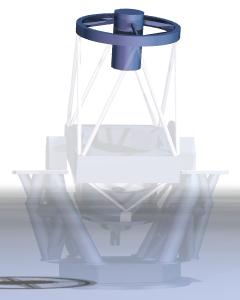 This curved structure forms the top of the telescope and is held to the main body of the instrument by the top trusses. The secondary mirror is secured to this structure and is motorised to allow for focusing of the telescope. Focus is achieved by carefully moving the secondary mirror nearer or further away from the primary mirror below. These movements can be controlled to within less than the thickness of a human hair while the range of movement can be as much as 5 cms.

Show me > the instruments 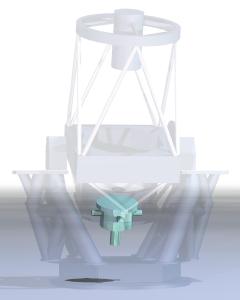 The Liverpool Telescope can accommodate four instruments for analysis work. In addition to the optical camera, there is also an infrared camera, a polarimeter and a spectrograph, which allows astronomers to measure distances in the Universe and the chemical composition of stars and other objects.