We use coordinate systems to identify the position of a point on a surface. When we talk about coordinates, we usually think of the surface of the Earth. However, we can use similar systems to locate objects in the night sky. We call these celestial coordinates. When we think about the night sky in this way, we imagine it as a spherical surface around the Earth.

To locate a point on Earth you need two coordinates: latitude and longitude. Unlike places on Earth, objects in the night sky appear to move over time. This is because the Earth is rotating on its axis and orbiting the Sun. So celestial coordinate systems must take this movement into account.

There are two main coordinate systems used in astronomy: Altitude-Azimuth and Right Ascension and Declination.

Click on each of the following to learn more: 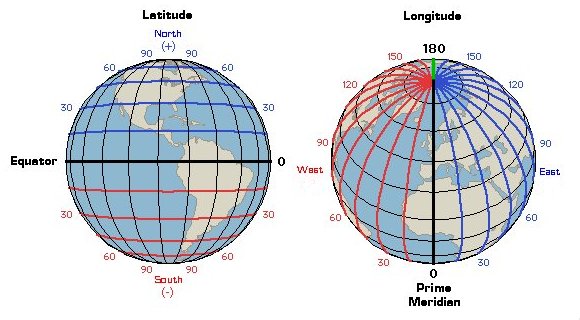 We use this geographic coordinate system to locate a position on the Earth's surface. A line on a map that connects points with equal longitude or latitude is called a meridian. Longitude and latitude are angular measurements and are measured in degrees.

Latitude tells us how far north or south a point on the Earth is. The Earth's equator has a latitude of 0°. There are 180° degrees of latitude. These range from 90° South at the South Pole to 90° North at the North Pole.

Longitude tells us how far west or east a location is from the prime meridian, where the longitude is 0°. The Greenwich Meridian, which runs through the Royal Observatory Greenwich in London, is the prime meridian. Because the Earth is a sphere, there are 360 degrees of longitude. These range from 180° East to 180° West.

We can describe the location of anywhere in the world using latitude and longitude. For example, the centre of Liverpool has a latitude of 53.3° North and a longitude of 2.8° West. We can write this as 53.3°N, 2.8°W.

The Altitude-Azimuth (Alt-Az)system tells us the vertical and horizontal positions of objects in the sky. This system is fixed to the Earth and not the stars. Because the Earth rotates we can only give an object's Altitude-Azimuth position for a particular moment in time. It also depends on where on the Earth the observer is. Altitude and Azimuth are measured as angles in degrees.

Two parts of the Alt-Az system have special names:

The altitude is useful for finding the times when an object is visible in the night sky. You have the best chance of viewing an object when it has an altitude of at least 30°. This is when the astronomical seeing is best.

You can also use the Alt-Az system to work out when an object will rise and set in the sky. When an object's altitude is 0°, it is either rising or setting on the horizon. Objects rise in the east, pass through the meridian and then set in the west. 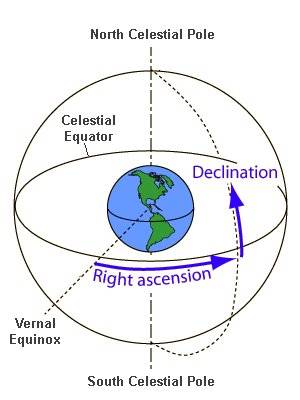 This system is known as the Equatorial system. It uses celestial coordinates to assign a unique position to each object in the night sky. These coordinates do not depend on the location of the observer or on the time of night of the observation.

The Equatorial system uses coordinates called right ascension and declination. These are often shortened to RA and Dec.

Example: how do we write the RA and Dec of the bright star Rigel?

The Earth's orbit changes over long periods of time. This means that the RA and Dec of an object varies each year. When astronomers refer to Equatorial coordinates, they state which epoch was used to locate the object. In other words, they give the position of the object on a particular date. The current epoch is called J2000.0. This means the RA and Dec of celestial objects are given relative to their positions in the year 2000.